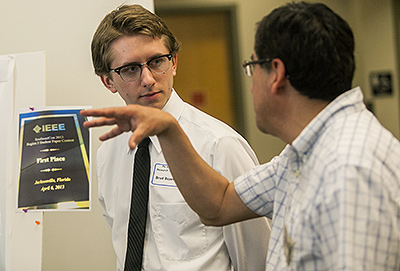 Junior Bradford Bazemore, majoring in Computer Science, earned First Prize in the Technical Paper Competition at the IEEE Southeastern Convention.  The Convention was held April 5-7 in Jacksonville, FL.  Brad has also been awarded an Undergraduate Research Grant from the College of Engineering & IT for the 2013-14 academic year.

Georgia Southern University student Brad Bazemore was presented with an award from the Institute of Electrical and Electronics Engineers (IEEE) during a regional conference held recently in Jacksonville, Fla.

The junior from Lawrenceville, Ga., won first place in the technical paper competition. “The paper discusses a universal model for other universities to use when building cluster type super computers,” explained Bazemore. “My goal was to reduce the complexity and standardize the design of these machines.”

According to Bazemore, super computers are already being used by people in the fields of physics, chemistry, economics, engineering, medical research and many other fields. “The computers are used to do so many things, from simulating the entire known universe from the beginning of time, to searching for a cure for cancer and  AIDS and autism research,” said Bazemore. “The problem is they are all different in design and tool sets, making collaboration difficult, if not impossible.”

Bazemore is a computer sciences major in the Allen E. Paulson College of Engineering and Information Technology. “It was really nice to come in first and know that your work has been validated and be able to share my work with the scientific community,” added Bazemore.