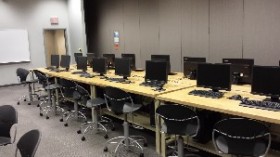 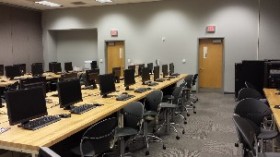 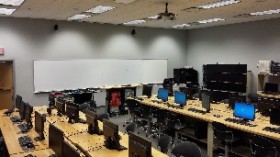 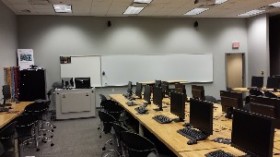 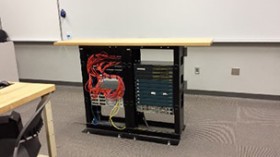 There are two labs that mirror images of each other, separated by a folding wall. Each lab has 36 seats or 72 when joined. It is rare that we join the rooms for instruction. Joining the rooms is utilized for special events when the standard classroom model is not needed.

The student seating is arranged for easy access for the faculty member to move behind the students to offer support. The desks are lab tables that stand taller than an average computer table and require taller chairs. The tables are significant enough to allow students to build, dismantle, and diagnose other equipment, adding to the adaptability of the lab. The height of the tables allow students to work at the tables without having to be seated.  Seats are simple rolling stools with backs. 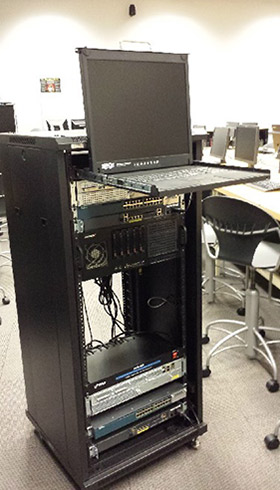 The room is carpeted with simple 2×2 carpet squares. This allows portions of the carpet to be replaced when stained or worn but more importantly, allows students to be able to remove sections of the carpet to expose the raised flooring below. The raised flooring is only 4 inches high but allows for the room to change over time and allows the network floor boxes to be easily maintained. It also allows students to work with structured cabling and not just patch cables.

There are two networks in each classroom: one private to the classroom and one that connects to the campus network. Each of the classrooms is on an individual vlan so that if and when students make mistakes, problems are confined to the classroom. The private network allows students to build and test many different scenarios without worry of damage to exterior systems. Both networks terminate in floor boxes and are then connected into the desks where students can quickly change from one network to the other.

The other termination point for the campus network is a network closet that is not accessible to the students and is a patch panel in the front of the room for the private network. The patch panels for the private network are mounted into a half ­height rack that also contains varied networking equipment. This equipment is then accessible to the students at their seats. 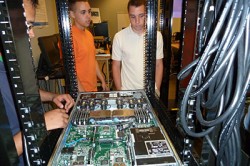 The teacher’s station for each classroom is equipped with a computer with dual monitors, one of which can be mirrored to the overhead projector. Also in the station is a document scanner, BlueRay player, and connections for a laptop. Some classroom management software is on each of the instructor machines but otherwise, the instructor computers are the same as the student computers.

To augment the networking equipment located at the front of the classrooms, 10 carts on wheels, each with routers, switches, a server, firewall, and a console, are available to be used in either classroom or elsewhere in the building. We have found that making sure that students have full view of the network (the raised flooring hides one run) from end to end aids in their understanding.

Links for IT Students 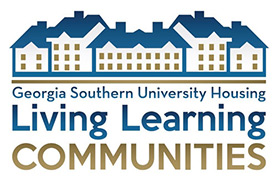