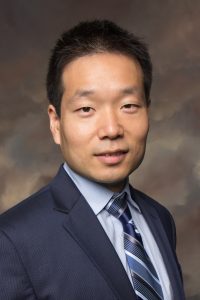 Concern has been widely acknowledged about human health–e.g., heating of the eyes and skin–from exposure to RF fields produced by wireless transmitters. Mobile telecommunications rely on an extensive network of base stations (BSs) and handheld devices that transmit signals via RF fields.
There is a chance of aggravation due to two important changes that will be seen in future cellular networks. First, the number of BSs will remarkably grow with the proliferation of small-cell networks, which will expose humans to RF fields more often. Second, highly concentrated RF beams will be generated by employing larger antenna arrays to overcome faster RF energy attenuation in higher-frequency bands such as millimeter wave (mmW) spectrum, which will increase damage if the main beam points at a human body. Our research is on the design of a mmW cellular network that keeps users safe from RF exposure. Specifically, it aims to harness the aforementioned two changes as the leverages for (i) wider selection of alternative BSs and (ii) more precise beamforming to the desired user equipment (UE) with less RF leakage to other directions, respectively.

To meet the recent burgeoning demand for bandwidth, the US government has been putting comprehensive effort into realization of spectrum sharing. Another explicit direction of the US government’s movement is to open millimeter wave (mmW) spectrum bands above 24 gigahertz (GHz), owing to recent technological breakthroughs that have newly enabled advanced mobile services in such high bands.
This research is motivated by three technical challenges inherent in the current status of literature in spectrum sharing. Firstly, spectrum sharing is scenario-specific. Accordingly, a spectrum sharing method must be band-specific, since, in different shared bands, different sets of primary and secondary systems are to operate. Secondly, additional control signaling overhead is necessary for coordination of multiple wireless systems in a single band. Due to the dissimilarity of wireless systems and the larger numbers of transmitters, the complexity of a communications and networking protocol will be far higher compared to that of a current wireless system. Thirdly, a UE that is held in hands of a user often presents a limited antenna gain due to the spatial limit to integrate a high-dimensional antenna. This will lead to the limited capability of a UE in communicating with an appropriate base station (BS), and eventually inefficiency in spectrum sharing.

Vehicle-to-everything (V2X) communications have been taking a critical role in facilitating safety applications in intelligent transportation systems (ITS). However, both of the two representative technologies–Dedicated Short-Range Communications (DSRC) and cellular V2X (C-V2X)–have been showing limitations: (i) contention for bandwidth and (ii) latency. Such limitations are expected to cause breakdown of V2X communications in scenarios such as very high traffic density, which this project refers to as “safety hole.” Driver eye movement tracking (EMT) has also been attracting interest in ITS as driver vision is one dominating factor in safe driving. Yet the main drawback of this technology is exceeding electrical energy consumption which limits its applicability in the directions of automotive industry evolution such as electrical vehicles and autonomous vehicles where efficient use of electrical energy becomes essential. This project aims to design a comprehensive traffic safety system via integration of V2X communications and driver EMT as a solution for each other’s problems. Driver EMT aids V2X communications to reduce (i) the frequency of safety hole occurrences and (ii) the length of a safety hole in V2X communications; while V2X communications make driver EMT require minimized electrical energy. This research plan suggests achieving three specific objectives. First, a mathematical analysis framework for V2X communications will be established. Then, the performance improvement via application of data aggregation and spectrum sharing, the key solution techniques that this research suggests for resolving the aforementioned limitations of V2X communications will be modeled. Second, driver EMT data will be studied for devising an EMT mechanism that is optimized for data aggregation and spectrum sharing. Statistical analyses will be conducted to find a pattern on contribution to accident events via comparison of data sets in various settings and scenarios. Third, an integrated traffic safety platform simulation software will be created. This simulator is to evaluate the performance of the proposed comprehensive traffic system that performs the core components–V2X communications (operating spectrum sharing and data aggregation) and driver EMT.