On Saturday, April 2, Georgia Southern’s Robotics Team made history by earning First Place in the IEEE Region 3 Robotics Open Hardware competition in Norfolk, VA.  The IEEE Hardware competition was held as part of the 2016 IEEE Southeast Conference.  Two Georgia Southern teams competed against 42 teams from other universities from the southeast, including Georgia Tech, Clemson, the University of Florida, Virginia Tech, and others.  Both Georgia Southern teams finished in the top five, and were mentored by Rocio Alba-Flores and Fernando Rios, associate professors in the Department of Electrical and Computer Engineering.  Drs. Alba-Flores and Rios direct the Robotics Lab and are faculty advisors to the Robotics Club.

In addition to this impressive win, the Georgia Southern ECE department had its best participation ever in presenting research papers  — seven faculty members, six graduate students and three undergraduate students presented their research in the technical program of the 2016 IEEE SoutheastCon. 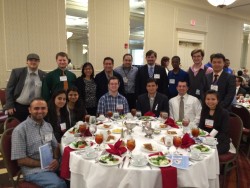